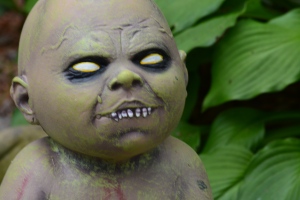 Here they are – my top five, in no particular order because all can be equally harrowing:

1. Being unprepared: Not so much unprepared with respect to content, but being disconnected to the learners and their needs. It is possible to get caught off guard with a group whose expectations are not a match with the topic or what I’ve prepared. Like the time with a group whose manager made them all come to my workshop, and unknown to me they were collectively engaged in a major power-struggle with said manager. Not fun being caught in the middle of all that.

2. A complete A/V fail: I once arrived to present to 300 practitioners, and as the speaker was introducing me, one of the organizers casually mentioned that the projector wasn’t working but should be up and running in an hour or so.

Me: “No problem, we’ll just go with the handouts.”

Speaker: “…and in conclusion, it is my pleasure to introduce our presenter….”

A live demonstration of the therapy mode I was presenting on bridged us to the arrival of the tech person. But if there had been no tech person?

3. A cancelled flight to a talk that has been booked a year in advance, for which lots of people have prepared with care and attention to detail. Last week’s flight out – on time, no less – on the biggest snowstorm of the year was an actual miracle.

4. Noise in the hotel the night before a talk: I’ve learned through experience to politely express the following wish list when checking in:

Upper floor (for some reason the partiers tend to be congregated on lower floors).

The worst was that night in Brazil having to pack up and change rooms at 1:00 AM because the folks next door had lots to say (though I don’t understand Portuguese), really loud voices, and no signs of flagging.

5. A boring presentation: It takes so much time, effort and commitment to get a group together, and it’s such an important opportunity to inspire and motivate change. Keeping things fresh, engaging, relevant and fun is a lot of work, but the alternative is bad news for everyone – presenter and group.